Stark Raven produces a radio program once a month featuring in-depth interviews, news and analysis on issues related to prisons and criminalization.

The radio program has been on the air for more than 30 years.

Looking for past shows?
For a show in the past four months, check out the Co-op Radio audio archive.
To hear Stark Raven interviews and shows from Aug 2006 to 2016, check out our show archive. 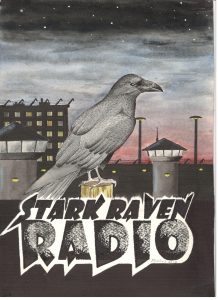 Other Prison Radio Programs Across Canada

*Prison Radio on CFRC 101.9FM, Community Radio in Kingston, Ontario, Wednesdays 7-8pm. cfrcprisonradio.wordpress.com
*The Prison Radio Show on CKUT, 90.3 FM in Montreal, the second Thursday of each month from 5 to 6pm and the fourth Friday of every month, between 11am to 12pm. prison(at)ckut.ca for more info blog: prisonradioshow.wordpress.com

Vancouver Co-operative Radio, CFRO, 100.5FM is a non-commercial, co-operatively-owned, listener-supported, community radio station. Located in the heart of Vancouver’s Downtown Eastside, Co-op Radio strives to provide a space for under-represented and marginalized communities. Support Stark Raven as we cut through the mainstream crime sensationalism with in-depth interviews, news and analysis on the role of prisons in our society and consequences of criminalizing affected communities.

Regular memberships are $60/year, though you can pay whatever you want/are able to for a membership.

Find out for more details on becoming a member of Co-op Radio here.